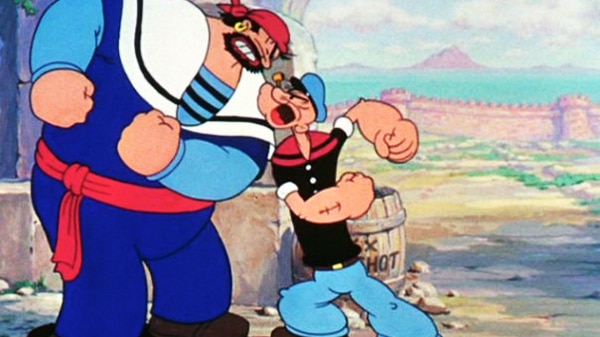 In 1919, Elzie Crisler (E.C.) Segar created The Thimble Theater, a long-running comic strip featuring the adventures of Olive Oyl, her brother Castor Oyl, and her boyfriend Ham Gravy. On January 17,1929, Segar introduced a new character to the ten-year-old strip: a funny-looking old salt by the name of Popeye. The character quickly became a favorite, and soon captured a worldwide audience. The spinach-eating sailor made the jump to the silver screen in 1933, when Fleischer Studios introduced him in a short entitled "Betty Boop Presents Popeye the Sailor.” Nearly 600 Popeye cartoons have been made since (and are still shown in syndication all over the world), which is why this Sailor Man remains one of the most widely recognized and best-loved animated characters of all time. This collection, spanning from 1936–1956, includes the 1930s classics "Popeye the Sailor Meets Sinbad the Sailor" and "Aladdin and His Wonderful Lamp".

f********m
Great movie! I finally ?atched it online in HQ. I figured some of you guys would want to watch it too! ;) Here is the site where I ?atched it: FULLMOVIE24K.COM Thumbs up if it worked for you New Movies => FULLMOVIE24K.COM